A friend and fellow GM wrote during a chat we were having that he hates traps in RPGs, but that since they were so prevalent that he'd like to find a way to make them more fun. So, here are some of my thoughts are what traps are good for and how to make them fun and interesting in games.

The argument against traps goes something like: Traps if detected are annoyances that have to be dealt with. If they aren't detected they are surprise damage. In both cases they are not very interesting.

Now we could punch holes in the above statements all day long, but what I'd rather do is prevent traps, or players' perception of traps, from resembling it. Here are some of the ways that I try to make traps interesting. 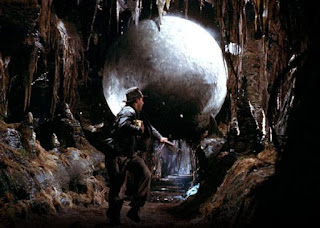 1) Players need to be aware that traps exists. In many games this shouldn't be an issue, but if you haven't been using them, then they suddenly show up, players will be taken off guard. Having a sprung trap near the entrance to your Trapped Halls of Dangerous Traps, with the remains of a less fortunate adventurer nearby, should give the players a good heads up.

2) Traps react to players not the other way around. Traps should trigger off of player actions, and a group that stays still shouldn't find themselves suddenly springing a trap (that's what wandering monsters are for). Conversely, players should know that opening a door, chest, traversing a long hall, etc., could all trigger a traps.

3) The Dungeon/Cave/Wilderness/etc. is an enemy character, and traps are one of the ways that it attacks the players. Traps should fit thematically with that character. Put a bit of thought into types, appearance, and effects of the traps. This will create a sense of consistency and generally be more interesting than just another pit trap.

4) Don't make traps binary! A hidden GM roll followed by damage isn't very fun. GURPS players, especially, are used to having an active role in avoiding damage. So, when traps are triggered, have the players roll a reaction before they are hit. Some examples are: Dodge roll to avoid projectiles, DX rolls to catch a ledge on pits or drop away bridges, or even a series of rolls such as a regular contest to out-run, hold-up, or otherwise struggle against a trap's reaction.

5) Narrate! This is perhaps the most important aspect to making traps interesting. Take the following, Bob heads down the hall, fails to spot the illusion floor, falls, fails to grab the side, then hits the floor hard. This could just be a GM roll to spot the trap, a player roll to grab the ledge, and a damage roll. Or:


GM: <roll> "As you pass down the dark corridor, you step forward and begin to fall. The floor is an Illusion!"  Roll vs DX.

GM: "Your arm shoots out reflexively to grab the side, but you just manage to get a handful of loose dirt as you plummet to the darkness below." <rolls damage> "You land hard on at the pit's bottom. Your leg screams in pain and your are bleeding from cuts and scrapes all over. As your eyes adjust you find yourself surrounded by the broken bones of others that were less fortunate than yourself. The calls of your companions from above echo down."


6) Make failure interesting. Aside from colorful narration, have traps cause some sort of change, reveal a clue, or otherwise cause some sort of new information or new action to take place. A trap might fire a dart at the player and cause a hall to shift, doors to seal/unseal. A pit trap might contain treasure or the journal of someone else who had died there.

I could go on, but I think this covers some of the basic ideas that I think can make traps more interesting and fun. I'd also like to mention Pyramid 3/60 for Christopher R. Rice's, "It's a Trap!" which has many great ideas for traps and how to design them.

Posted by Joseph Mason at 7:25 PM No comments: