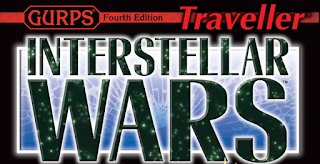 Here is a quick recap of the first session of my Interstellar Wars game.

The Ziggy Stardust set out from Nusku on Friday, May 4th. Making minimal time stops to refuel and avoid any Imperial patrols, continued across the the Dingir sector. Then on Tuesday, June 19th they arrived in the Duriim system.

Landing at the main spaceport, the crew got their first taste of a dense atmosphere planet. Suiting up, they headed out and got the ship registered. Then sought out the local bar to see if they could make some contacts and see what was going on.

At the bar the crew tried a few Vilani drinks and met up with a few other Terran's who were on another free trader and were waiting to hear back from their captain. During this time the crew also got a call from steward Sadaka letting the player know that the duties on any goods sold were very high and that they wouldn't be making any profit this way. The crew asked the other Terrans if they had to pay the high dues, and were told that if they wanted to trade on Duriim, they needed to speak to Falk.

The party got directions and went to find Falk, in a little shop near the spaceport. Falk was a Terran expat who helps Terrans sell goods by listing those goods as his property. The only issue is that he's only allowed so many sales listed at a time. If they players wanted their goods sold, they would have to wait... or find a way to help Falk get more listings.

He told them that the two people that might help him get this are Ammim Larsharlum, son (3rd born) of the iishakku and heir to the title, and Mizikhi Larsharlum his older sister. It was implied that Ammim was the "proper" route, but that it might not be easy to win him over. Mizikhi, on the other hand, would be more approachable but getting her help might be less than legal.

So, after a short discussion, a dissension was made and Falk set up a meeting with Mizikhi.

Soon, the party found themselves entering a building that looked like a cross between a warehouse and a dance club. Some of the toughest looking Vilani they had ever seen were hanging out playing some card and dice games. In the center or the room was a raised platform and there stood a tall (especially for a Vilani) woman with a naval-like uniform and a patch over her eye. With a big, wolf-like smile she said, "Terrans!"

We ended there for the night. Things were a bit slower than I wanted for the kick-off game, but I didn't want things to get too chaotic. Everyone is pretty new to the setting and I wanted to ease things in a bit. I probably too that too far and things never got exciting. We'll see if the second session picks things up a bit... or a whole lot.
Posted by Joseph Mason at 7:00 PM No comments:

I decided to run a "episode 0" session for my group before they had characters draw up. They had ideas of who they wanted to be, but this gave them a chance to get into character and figure out the characters. I'm not sure how well it went, but it was a fun.

I like to think of this session as the "unaired pilot". It sets up the backstory, but if characters need to change or be alter, it doesn't really matter. Continuity hasn't started yet. ;-)

Read more »
Posted by Joseph Mason at 9:50 PM No comments:

I've been busy lately prepping and working on a new campaign. We're going to be running Traveller Interstellar Wars! 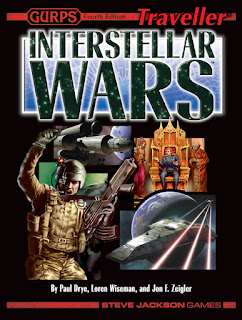 We're going to be using the "default campaign" with group of Free Traders setting out from the Terran Confederation in 2170. Trade, exploration, aliens, war... what else could you want?

As far as rules, I'm using GURPS (of course), but instead of the ship design rules in IW, I've opted to use the GURPS Spaceships rules and combat. I've been working through converting the ships in Interstellar Wars. I've posted them to the SJGames Traveller forums, and will be posting them here soon.

Characters will be 150 points. I've already run an "episode 0" where the players didn't yet have characters built, but we ran through some background and some roleplay to set the stage and let them get a feel for their characters and the world.

So... Hang on travellers.


Posted by Joseph Mason at 8:38 PM No comments: