I don't normally do reviews, but I really enjoyed the latest issue of Pyramid and thought I'd share my feelings on it. 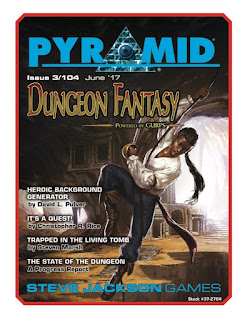 First off, I never read a full issue of Pyramid, at lest not at the same time. I cherry pick the articles that most appeal to me, and maybe skim through the rest. Later, I might revisit that issue and read other articles, but this issue kept me reading. It was even more focused than the typical issue (being one of the Dungeon Fantasy RPG issues).

Now for the articles:

From the Editor - As always, a good set up for the rest of the issue.

Trapped in the Living Tomb - A solo-adventure! Yes! I love solo adventures, and think they are a great tool for introducing folks to a game. This one is pretty solid and a lot of fun. I'd love to see more of these in the pages of Pyramid (or anywhere really).

The one thing that I think could have made it better, is if there was a bit more variety in the skill checks. A full character sheet is provided (yay), but it would have been nice if more of the listed skills could have come into play.

[To be fair, I didn't read every entry after playing through, so I don't know if I just "missed" them, but they were not on the "critical" path as far as I could tell.]

It's a Quest! - I wasn't so sure about this system going in. I already try to tie loose plot threads together when my games start to feel like random disconnected events. But my results are somewhat mixed.

This systematized way of turning episodic type play into something a bit more "meta plot" is interesting, and I think I'm going to give it a try.

Heroic Background Generator - Ha ha, this is great! At first it seemed a bit goofy to me. Tables to generate a backstory? But after looking at it, I see a lot of cool use.

I've been wanting to come up with something like a "life path" system to use in GURPS for awhile, but I didn't want to rob players of the choices that GURPS offers with its point buy character creation. Even DF has plenty of choices on the templates.

But this system isn't a character creation life path system. It just generates a loose background that the players can use to inform the choices they make in character creation! I can also see lots of uses for generating interesting NPCs.

The State of the Dungeon - Nice recap of where things are, and what's to come.

Preparing for the Hero's Journey - This could be called: Just Good Advice. It is.

Posted by Joseph Mason at 9:18 PM No comments:

The Problem with GURPS (a response)

Every once-in-a-while I search GURPS on YouTube and see if there are any interesting videos. About a week back, I found such a video with the title, "The Problem with GUPRS".

At first I was going to pass on this video, figuring it to be another GURPS hater that just wants to beat up on a system he doesn't like. But I decided to give it a look and see what exactly this guy thought was wrong with GURPS.

It is a pretty good video so, give it a watch.

In short, he likes GURPS, but will choose setting specific rules over using it. GURPS is the "backup plan" in his mind. That's fine, but the tone is very much one of universal acceptance, and I wholeheartedly disagree.

My "problem" with GURPS is quite the opposite. I don't want to use any other rules, even when there is a (non-GURPS) set of rules for a setting I want to run. I've tried, but by the time I get into the "meat" of the rules my mind just starts to think, "I could do this better with GURPS." (There is a whole other topic on that bit that I could go into.)

In fact when I first got into GURPS, I immediately started writing conversions for some of the games that I had picked up and loved the setting of, but was very turned off by the rules. (I wonder if I still have the notes for converting Cybergeneration to GURPS 3rd edition somewhere...)

I'll hack, alter, house-rule, and modify GURPS all sorts of ways depending on the type of game I want to run, but the core stays the same. It is still "roll 3d6 under attribute/skill".

So, every gamer is different and that's fine. But for me, GURPS is my "Plan A" almost every time... even if someone else published a set of rules for the setting I want to play.
Posted by Joseph Mason at 8:18 PM No comments: