A week has past, and the prepaid stay at the inn is over. Time to get out and do some more adventuring!

After a bit of shopping and getting things sorted from the last adventure (and many technical issues). Drog and Phelix hit the local pub scene to see what work they can drum up. Silva, a woman with a patch over her right eye offered the group 100 silver if they could deliver a special gem that is said to be in one of the lower caves. She also warned them that a snake-like creature lives in the cave and had killed her whole adventuring party when they had gone looking for the gem years ago.

Later, a woman burst into the tavern pleading for help. Her name is Morrelle and her husband, Darrow, has been kidnapped by the One-eyed clan, I group of Orcs that base in the Caverns.

After getting the others around the group set out to the caves. During the night a sound was heard near the camp, but it wasn't until the next morning that the group found an arrow shot into a tree nearby. A scroll tied to the arrow said that they Orcs were waiting for the party. It was signed with a symbol of a cracked skull.

When the party arrived at the caves they didn't notice that some of sounds of nature were in fact the orcs signaling that the party approached. Still, they had decided to take the hidden tunnel that they found in the Geckling Den to approach the Orcs.

In the Geckling den they noticed a lot of tracks and marks like things had been moved around. There were also secret doors that were left open. The party moved through the area without meeting any Gecks and took their passage into the orc hideout.

The room on the other side of the hidden tunnel was some sort of mess hall. A solitary orc sat in there eating. Drog decided to sneak in and made quick work of the unaware orc. There wasn't much else in the room so Phelix decided to move out through the double doors and scout ahead.

After moving down the hall a bit, he spotted 3 orcs ahead. Soon after, one of them caught sight of Phelix and began to move towards him. Once he recognized that one of the adventurers that he and several other orcs were waiting to ambush had some how make it in behind him, he called out and a fight ensued.

The two of the orcs in that room were wielding spears, the other was a cleric/shaman. Just beyond the character's vision were 2 more orcs with spears and two with swords and shields. These four were waiting behind a set of doors near the front entrance, and another identical set of four were across the hall. Once melee started, three of the orcs came to join, while one went through the door to get the others.


Being somewhat smarter and better trained in combat than the gecks, the Orcs held back and waited to form up before engaging the enemy. This (I think) caught the party a bit off guard and resulted in several turns of waiting and positioning. This tactic was somewhat successful for the orcs, but after an explosive lightning attack stunned a group of orcs, things started to turn. This is about when the others started to show up.

Eventually though the party finished off all 11 orcs (even the ones that tried to retreat or surrender). They checked the rest of the area finding mostly just cooking supplies and what the orcs had on them.

Across the hall they entered the shrine to the one-eyed god that these orcs worship. Noide felt the presence of a dark power as soon as he entered. At the shrine they found the bodies of several goblins and a geckling laying at the feet of the One-Eyed god's statue. In one hand the statue held a note, evidently from the geckling telling the orcs about the adventurers.

Drog decided that this foul thing needed to be destroyed and knocked over the statue. This shattered the statue's head, and a dark cut gem fell out. The party took the gem and continued on.

Steps leading up ended in a pit trap that Drog spotted. Phelix jumped the pit then put down boards for the others to cross. They checked the next couple of rooms which were empty, then opened up a door (not listening this time!) into another orc barracks.

This group of five orcs had heard the sound of combat, but assumed that their side had won. They were surprised to see the adventurers casually walk in and it took them a second to react. By then most of the party was in the room and attacking. And again the party left no survivors.

After the sounds of combat ended the players heard a thud from beyond the next door. They followed it into an alchemy lab where they found some potions, then into the next room which was the orc leader's bed room. Here the met a pair of non-warrior, female orcs cowering in the corner.

Searching the room they found a chest, and Drog mistakenly thought it was trapped (natural 18 buddy). So after several turns trying to disarm the non-trap, it was discovered that it was not trapped and Phelix unlocked it. Here they found a sizable treasure, some tomes of magic, and a golden key.

Beyond the door the party found the leaders sacrifice chamber. They also saw the body of Darrow and the appearance of a Demon. Drog ran to confront the demon while Phelix sprinted to the leader. The casters were both a bit drained by this point and had to use several vials of paut.

Phelix made quick work of the leader while the Demon and Drog exchanged very powerful blows. Farthing had let everyone know that this type of demon (Demon of Old) could only reliability be killed by an attack to the heart. 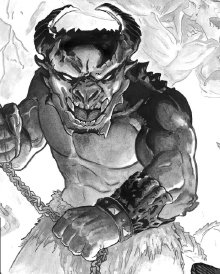 Attacking from behind Phelix hit the monster's heart and destroyed it. Afterwards they took the wizards staff, potions, and a small silver ring he wore. Phelix decided to slip on the ring, then found he could not take it off. Moments later the two orc women ran at him asking if he was hurt and if there was anything that they could do to help him.

The party searched the remaining rooms, found a bit more storage and the orc armorer's workshop.

That's were we called it. A follow up to this will detail the return trip, the selling of loot, etc.

This game still had some rough spots. The first combat was slower paced than I wanted, but I think the group was still adjusting. All worthy enemies (even weak-ish ones) can be a slog (especially 11). Magic is still an issue on both sides. I need to make sure my casters have their spells on a cheat sheet.

Anyway, it was fun... and I think I might see some plot on the horizon.