NWN, VTT, and the Future

Many years ago, a little PC game came out called Neverwinter Nights. While I wasn't a big fan of D&D, I loved that this game allowed user created content and a sort of GM-ing within that game. This was the first time I saw a computer RPG move closer toward the table top experience. My hope was that this would just be the first attempt of a new genre of CRPGs that blurred the line between the Tabletop and Computer. Games with easier to use tools, more GM options, creating of custom rule sets, etc.

But no others came. Sure there are other games that had mod tools, and allowed the creating of custom levels, quests, etc., but they didn't allow for GMing. [I never played with the NWN2 editor, so I can't speak to that.]

Later I found a new tool for gaming, the Virtual Table Top. The early VTTs I tried were often buggy and very limited. These were usually passion projects from gamers who knew how to code, but not what you would call a professional project.

As time when on they got better and better. New VTTs came out that offered more features, better support, and fewer bugs. They were no longer just chat programs with built in dice rollers. They had maps, tokens, HEX GRIDS!

But now I am seeing something even more exciting happening. My dream of a Video Game that can function like the table top may come from a Virtual Table Top that works like a video game!

I currently use Roll20 for my weekly GURPS game, and while this is simply the best VTT I've ever used, there is still a lot of features that I want that it doesn't deliver ... yet. Still, it works well, and has some neat features (subs get the dynamic lighting which is very cool).

Even more exciting for me is Tabletop Connect, which I supported the Kickstarter for. Actual 3d models in a 3d environment, dynamic lighting, physics based dice, easy to create fill-able character sheets, and more! It is still early in development, but getting better all the time. Unfortunately, it isn't usable for me right now (even though as a backer I have access to the dev build), due to it not having support for hex grid, but that is coming. 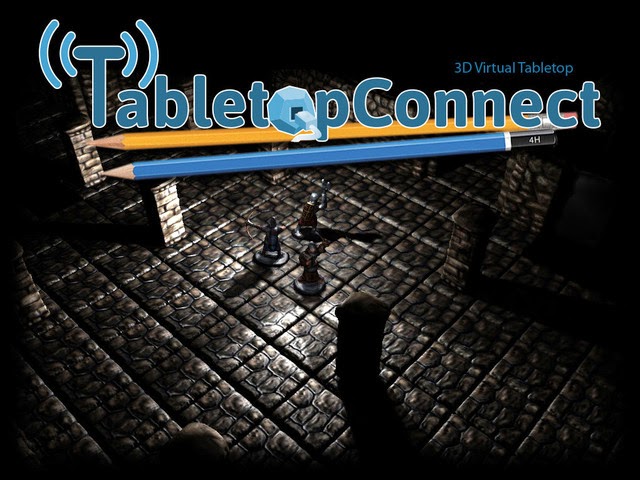 And then there is Tabletop Simulator, which is basically a physics sandbox for paying board games, but also has support for RPGs. I haven't had a chance to check this one out, but it looks promising.

My hope is that these sorts of projects will just continue to get better and better. None are perfect, but they are moving in the right direction. I also hope that some of the RPG publishers out there are taking notice of these and maybe looking at creating their own or supporting what is out there.

Let's face it, tabletop RPGs are not a great way to make money (that's a whole other post about how lucky we are that anyone bothers to support this hobby at all). But VTT would be a great way for companies to expand their revenue streams. Selling adventure packs with maps, minis, etc. Selling character and monster figures/tokens. GM and player game aides, character sheet imports, etc. I would happily invest in this sort of thing. It is also a great way to allow the community to contribute. Let others build levels and models then sell them through the VTT (and everyone taking their cut).

And it doesn't have to just be for the on-line gamers such as myself. Tools to manage virtual avatars, options to 3d print your custom character. GM and player tablet apps that interact and integrate rules (and upgrade packs that add new supplemental options).

This is where I want to see TTRPGs going, embracing technology and offering new ways to play. Maybe it is just a dream... but it is one that is getting closer every day.

Email ThisBlogThis!Share to TwitterShare to FacebookShare to Pinterest
Labels: VTT